When the idea for the road trip popped into my head I was in Hawaii. After being asked “so what do you do in Boston?” for the umpteenth time I came to the realization that I wasn’t doing much at all. So the road trip idea was born. I started to work out some logistics while in Kauai with Katy. We both got really excited when we realized that we could do part of the road trip together and furthermore got excited about making a stop down to New Olreans. Done and done.

So, we’re in New Orleans now and we’re trying to shake off last night’s attempt at Bourbon Street. There’s not much to do in New Olreans at night besides listen to live music and drink. We did both. At one point in the night I was on a balcony of a bar overlooking Bourbon Street, feeling a little out of place. There were men all around me with beads in hand, salivating over the thought of seeing titties. Katy and I apparently looked too sober or too much like a lesbian couple to get harassed that night – thank goodness!

Here’s some live music from the first bar we stopped at:


Getting to New Orleans was more of a haul than we had expected. We drove a whole 12 hours from Hunting Island, SC. That was the first drive of true “road trip” quality. Somehow we agreed on 12 hours of music and 12 hours of air quality. I couldn’t quite convince her to listen to lectures on patent law – I’ll save that for the long hauls by myself.

Anyway – so we had our second camping adventure in Hunting Island, SC. We drove there from Pat's in Charlotte, after a brief detour to have lunch with my mom and the friend she was visiting in Raleigh, NC. 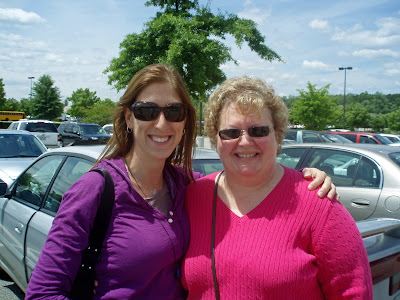 (My mother and I - and her crooked sunglasses - you might want to get that fixed mom :)

We arrived at Hunting Island State Park later that evening. The camp grounds were full of RVs and tacky RV set-ups – some people decorated their sites with lanterns and lawn ornaments and some people even brought their direct TV dishes. The whole RV camping thing doesn’t make much sense to either Katy or I. Luckily our campground was tucked away from everyone else, but to be so isolated we had to forfeit a spot right on the beach.

We arrived at our site, set up our tent and left to buy firewood at the camp store. We returned to our site not ten minutes later and found our cooler had been rummaged through. Damn raccoons drank our soy milk, ate a container of hummus and nibbled on our cheese! Luckily we still had food for the evening. Katy got the fire roaring and cooked a pasta, veggie, hummus concoction that was yummy! 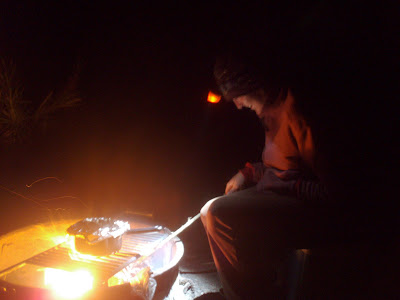 We had another critter visit us, but this time it wasn't so bad: 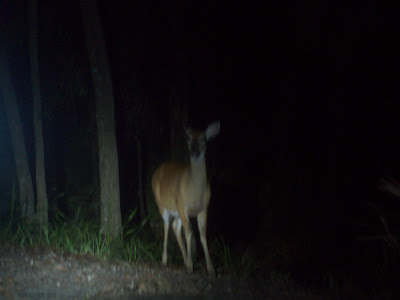