Austin is incredible. This has been by far the best stop on my road trip. I arrived in Austin Friday, May 22nd after dropping Katy at the New Orleans airport and spending all day driving through Louisiana and Texas. I was unfortunate enough to hit rush-hour, Memorial Day traffic going through Houston and felt as though my car was going to get eaten up by all the giant SUVs, trucks, RVs and 18-wheelers that were speeding all around me. This drive made me miss the go-cart type driving in Boston – at least in Boston the cars are smaller and you can’t drive as fast (fast is a relative term.)

I felt a huge sense of relief driving into Austin. I almost can’t believe that this place exists in the middle of Texas. Locals refer to Austin as the blueberry of Texas because it is a little circle of ‘blue’ on the state’s political map. It is so liberal and alternative here and I feel right at home – I could definitely live here someday…

I drove over a beautiful river and traveled by cutesy shops in pursuit of my motel. Then, there it was in shimmering neon lights: The Austin Motel. 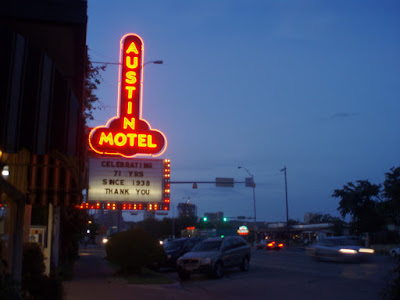 Please don’t ask me how I stumbled up on this place – but I promise you it was not intentional. I intended on couchsurfing during my entire stay but I wasn’t so lucky in finding a place to stay until Monday night. The Austin Motel location was sweet though – it is right in the heart of ‘soco’ which is a super hipster hangout. After I checked in and made sure there weren’t mirrors on the ceiling I set out on foot to explore the area.

My first full day in Austin and all the days to follow were spent with couchsurfers. The CS community is really strong in Austin and I lucked out in meeting and hanging with several cool locals. On this first day I met up with Dave (below) and we hiked around, went swimming and hit up a local BBQ joint where the portions were unbelievable. 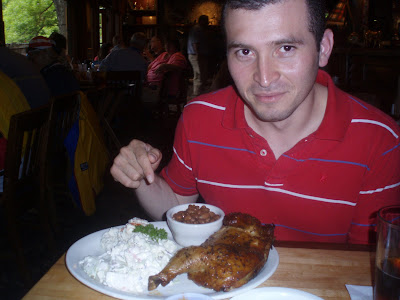 That evening we went to a CS house party where I met Stephanie who invited me out boating the following day. Day two in Austin I went boating with her and a couple of her friends on Lake Travis - I couldn’t have asked for a better afternoon in the sun. We cruised around this gigantic lake and made a final destination stop in Devil’s Cove. Devil’s Cove was a fascinating place; there must have been hundreds of boats tied up to each other in various strands and thousands of people drinking on the boats, in the water and on pool floats. It felt like Spring Break… 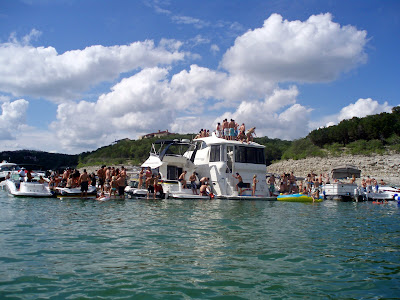 After all this amazing time spent with locals I decided it was time to do some of my own city exploring and the following day I took off on foot: I walked to the Capitol and experienced a “Secede Texas” protest; I resisted buying tons of cute stuff at local boutiques; I watched triathlon competitors race on their bikes thru the city; I walked along the river; I met up with another CSer at a backyard BBQ party; I watched an insane amount of bats fly out from underneath a bridge (below); and later in the evening I met up with yet another CSer who hosted me for the night. 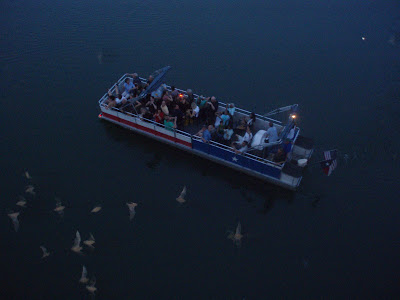 Today is my last full day in Austin and I’ve been having a great time hanging out with my CS host, Bethany. Earlier today we hung out at to Barton Springs (a natural spring.) Later tonight we’re headed out for tacos and then she’s going to cut my hair…

It’s really sad to be leaving Austin as I’ve truly felt at home here, but alas it is time to move onto my next destination: New Mexico.