I felt like Christy Brinkley in National Lampoon’s Vacation

Ok, so maybe I don’t drive a hot red corvette and I don’t seduce married men on their family vacations. I was however driving the wide open road of Texas for hours: windows down, hair blowing, not a care in the world and every spontaneous muscle in me twitching.

In foresight of the road trip I had anticipated driving straight from Austin to Albuquerque. By the time I left Austin though I was en route to Carlsbad Caverns National Park – a stop which came as a strong recommendation from my new CS friend, Bethany. At a pit stop about two hours from my destination I saw signs for Big Bend National Park. Without much thought I followed the signs and started traveling 2.5hours in the wrong direction in search of Big Bend and the adventure that waited. That’s when the National Lampoon’s Vacation feeling really set in.

The park was breathtaking, massive and isolated. I wasn’t quite sure what I was doing there, so I stopped at the ranger station and got advice about hiking trails. I found myself at the foot of the Lost Mine Trail around 5pm and found myself at the top at 6pm. Each step of the way was more beautiful than the one before and once I got to the top it became clear to me why I had driven so far out of my way. 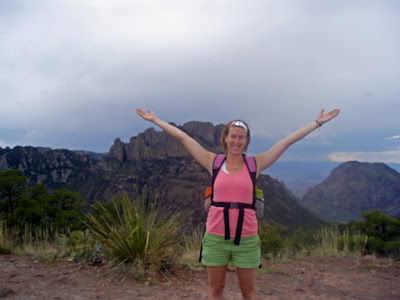 I was hungry and exhausted after my hike and set out to find the base lodge restaurant. On my drive I stumbled across a campground. This sparked my interest just as the first sign for Big Bend had. With that I cruised into the campgrounds looking for a place to set up my tent. I found a vacant site near a couple of guys I had passed earlier on the hike. I claimed this site and traveled over to meet these guys. The Road Warriors, as they like to be referred to, were great guys! They took me right in and offered me beer. We hung out for a while until I was too cold and sleepy to be social.

I wish I could say I fell asleep right away, but it took some time to get accustomed to the whipping gusts of wind and all the odd noises of the Park; not to mention I was in the middle of bear country. After a surprisingly sound night of sleep I awoke to freshly made coffee – that is made by The Road Warriors (below). I joined the guys for breakfast (by invitation of course) and had my first MRE (Meals Ready to Eat) – scrambled eggs and bacon. I’m really glad I ran into The Road Warriors - they taught me a thing or two about campsite eating and minimalist packing and they made my first solo camping experience feel a whole lot safer. 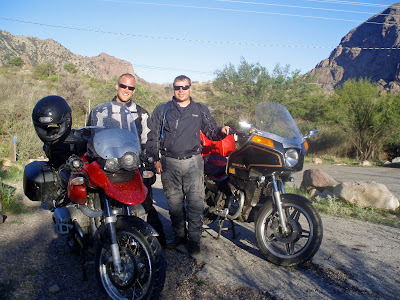 After having a hot breakfast in the middle of the beautiful Chihuahuan Desert I was more than ready to start the day. I cruised through the Park and onward through Texas with my favorite road tunes blaring – Ray Lamontange, Van Morrison, Joe Cocker, Ben Lee, Rufus Wainright…

My next stop was Carlsbad Cavern National Park in New Mexico. I spent about an hour in the cave, speeding past many groups of tourists, quickly taking in the sites. It was definitely the best cave I’ve ever seen – being one of only two caves I’ve had the pleasure of being in. 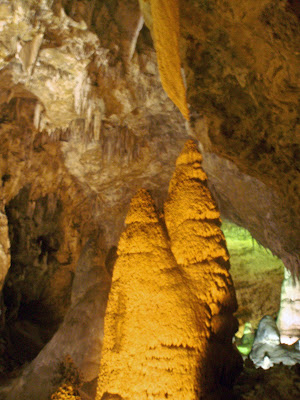 Now I’m in Albuquerque staying with a couchsurfer. She is bizarre - I will explain later. First thing in the morning I'm out of here...