Where everybody is somebody

On my way out of Santa Cruz I swung by the local elementary school and saw this slogan etched into the school’s colorful wooden sign: “WHERE EVERYBODY IS SOMEBODY.” That would be the polite way to describe SC. I rather like describing Santa Cruz as a secret refuge for the exceptionally weird. I heard someone else compare Santa Cruzians to marshins. Don’t get me wrong, I have nothing but respect for the city and its dwellers, yet I can’t help but bat an analytical eye at a population that so effortlessly lives perpendicular to the grains of society.

I arrived in Santa Cruz after spending a week, essentially alone in the woods. Having adapted to the simple lifestyle, vital to camping, I instantly came to appreciate some slight luxuries of civilization, such as being able to store my food and fragrant toiletries in my car without fear of a bear tearing through it. I stayed with my friend Kristen who was renting a room in Arthur Hull’s home. I name drop here because, according to Wiki “Arthur Hull is an internationally renowned percussionist. He is seen by many as the person who conceived and developed the idea of the facilitated community drum circle.”

Now, again, I have nothing but respect for Arthur and his art, yet it is impossible to ignore his eccentricities. His home is full of indigenous African paintings, the ones with the all the dots in shades of reddish brown, black and ivory. He has unique and artfully crafted drums adorning the walls of his hallway entrance. Bamboo stalks are seen through almost every window in the home, and a jaunt around the exterior reveals total tranquility with a bountiful garden, many plants of which are edible and a waterfall that breaths fresh water into a pond full of lily pads and koi. Arthur himself is quite the sight in his traditional African garbs, complete with cloth hat. He exudes a young and free spirit with aspiring roots in Africa. 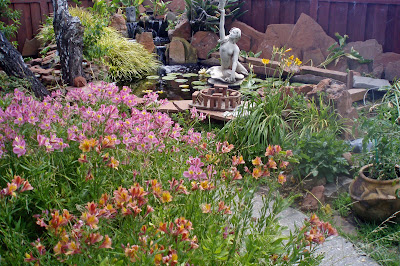 I thought I had Arthur pinned, until I saw his Lego room. Walking into the Lego room carried with it the same sense of awe and discomfort as that scene from “A Beautiful Mind” when Jennifer Connelly walks into Russell Crow’s secret hideaway and finds a frenzied mass of conspiracy notes. I walked into the Lego room to discover hundreds of tiny Lego drawers, multiple Star Wars replicas and other replicas I could not place and the apparent tinkering of several unfinished projects. This tipped the scale on eccentricity. 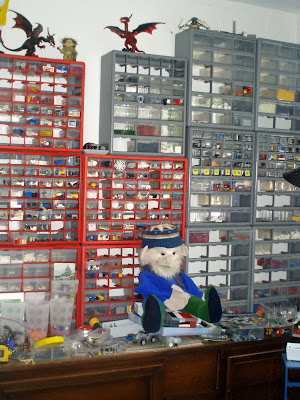 My first evening in Santa Cruz Kristen took me for a spin around town. We drove all along the coast making our way into the ‘downtown’ area and passed a rather large amusement park that was nestled in next to the water. After some excellent sushi we rolled by the local pharmacy to pick up some 40’s in anticipation of watching surfers and the sunset. The pharmacy was run by the dazed and confused and we experienced the employees fighting over the loud speaker about who ate who’s pizza. We got out of there with brown paper bags for our 40’s and found our place along the water. We must have watched the surfers for nearly two hours and for the first time since my arrival in California it felt appropriate to categorize our experience there as gnarly. 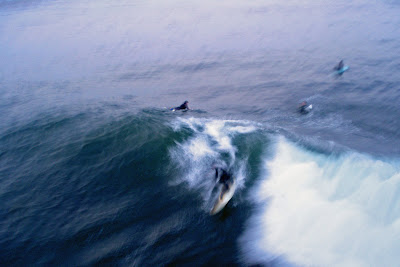 Kristen brought me out for a surfing lesson the following day. I forgot how unforgiving wet suits were. We paddled into Cowell Beach which claims to be one of the best beginner beaches in the world. The waves were barely breaking, but I did manage to stand up and catch one wave before letting out a high pitched yelp and bailing. We attempted another surf spot at Pleasure Point where Kristen was more in her element and me, well, I was mostly there to take it all in. I attempted a handful of waves, but was unsuccessful and as I paddled back into the ocean I was assaulted by a succession of waves, one of which caught me prone on my board and ran me smack-dab into another surfer, who had the good sense to dive below the water. I couldn’t help but laugh at my misfortune; in a way it was refreshing. I think I could get into the whole surfing thing. It was enormously peaceful sitting on my board, bobbing in the water alongside other wet-suit clad surfers, looking out at the water. Sitting there, looking for waves is after all a good 75% of what surfers do. 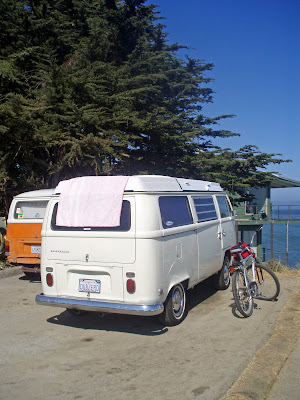 The beach life exposed a culture of surfing and sand covered activities. The coffee shops and bars of Santa Cruz exposed a whole other culture. I have never seen so many colorful mohawks, tattoo sleeves, facial piercings, thick framed glasses and mismatched clothes. Before embarking on this road trip I lived in Jamaica Plain, arguably the funkiest and most alternative neighborhood in Boston and yet there is simply no comparison. In my continual quest for the curious and unique I, myself felt rather boring and ordinary here. I was however quite amused with the mainstream culture of SC; the blatant and blissful disregard for social norms creates of a peaceful environment where everybody can be somebody (well, almost everybody.)

I could have easily spent a week or more in SF. I love this city and am seriously considering moving here when my 15months are up. I got to experience the beauty of the coast, the iconic views of the Golden Gate Bridge, the exotic botanical gardens, the Castro, the Mission, the Haight and last but not least the Pinball Museum. My first night in San Francisco I met up with an old friend, Jamie, who took me to a very happening bar in the Mission called Zeitgeist. We sipped our Big Daddy beers and munched on Tamales. After making a brief stop at her house and encountering the cat that purred like a pigeon (see video below) we got some of the most delicious ice cream I’ve ever had.

San Francisco really has it going on with food. In my first and only full day in SF, my friend Katelyn and I went out for dumplings in Outer Richmond at the Shanghai Dumpling King - I had never experienced such pasty, doughy, fried goodness before.

Katelyn drove me through some amazing parts of the city including the Castro and the Haight. Everywhere I looked my eye was pleasantly distracted by colors, characters and dynamic views of the hilly landscape. Our day ended with a trip to Lucky Ju Ju, a pinball museum in Almeda that Jamie had told me about. The museum is just as fabulous as you would expect: all the pinball machines, dating back into the 1960’s are on free-play so no quarters needed. Katelyn immediately took to the Adams Family machine and then we both wandered around playing on as many machines as we could for as long as the excitement lasted, which was exactly an hour. 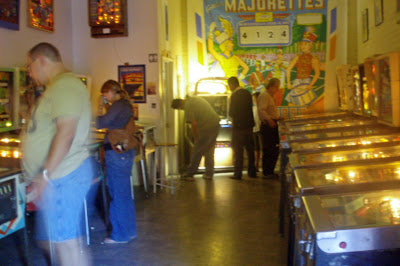 I have a good feeling that I’ll be back to that pinball museum and to SF in general.
Posted by Al at 10:29 AM