"These songs are true, these days are ours, these tears are free..." ~ Paul Simon

The drive through the Southwest was magical. I drove from the northern rim of the Chihuahuan Desert (Albuquerque) through the rolling hills of Northern Arizona to the heart of the Sonoran desert (Phoenix). This drive brought me through some of the most extreme and contrasting landscapes I’ve ever seen in less than an eight hour drive. I broke up the drive with a visit to the Petrified Forest National Park (in Northwestern Arizona) where I battled gusty winds and bus-loads of senior citizens. The petrified wood was very cool to see up close and I loved the Painted Desert with all its purple mountains!

Continuing onto Phoenix I picked up the Pony Express route and drove down roads that whipped through the mountains with hairpin turns and steep descends. Paul Simon’s “Rhythm of the Saints” album set the perfect mood for this drive. [Although the audio quality isn’t 100%, here’s a video of one of my favorite songs on the album: http://www.youtube.com/watch?v=2DHYo69JVm4]. Paul Simon followed me right into Phoenix where the temperature spiked to over 100 degrees. 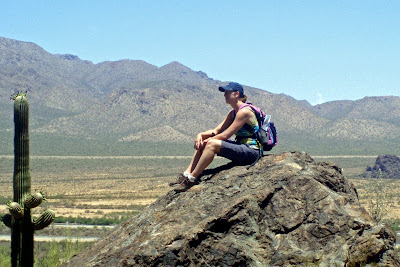 So I arrived at a place I will soon call home. The stakes were high for me on this road trip stop. I knew I would compare Phoenix to every other road trip stop, and already it doesn’t even compare. I had the chance to visit with family who live just south of Phoenix and was able to drop off a trunk load of stuff I had been transporting all the way from Boston. I am very fortunate to have family so far away from any place I’ve ever called home. While I was here for a few days I went up to visit the Thunderbird campus and said hello to admissions and all the other staff I had been in touch with during my application process. The campus is small, but nice and I don’t think I’ll have any trouble focusing on my studies for the 15 months I’m there. Perhaps the lack of enticing local activities will be exactly what I need to do well in my MBA. [This is my school: http://www.thunderbird.edu/ ]

The drive from Phoenix to San Diego was probably my least favorite so far. The temperature never dipped below 105 the entire way; it made me wonder if I could just stop off for an hour and get my windows tinted. It was hot and I was gross and sweaty. Every pit stop I made along the way was disgusting. I incessantly washed my hands and popped vitamins and electrolytes along this drive. One of my stops was in El Centro, CA; I can’t even begin to describe the area, but I imagine it might look and feel similar to some impoverished city in Mexico. I was relieved when I got closer to the coast. The temperature began to drop, the landscape started to look more tolerable and the ocean smell drifted through my car windows. 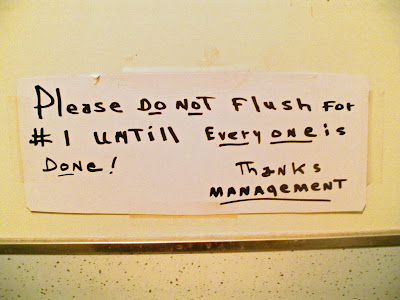 (this sign was above the toilet in one of the fine establishments I made a pit stop at)
In a roundabout way I couchsurfed for my first night in San Diego. My old roommate Rinaldo, a native San Diegoan or San Dieger or San Diegist, or whatever you call them, was kind enough to put me in contact with one of his old high school buddies. When I got into San Diego I met up with his buddy Rich at a nearby diner. I showed up grimy and underdressed, he showed up in his police uniform. I’m sure we were an interesting sight when we sat down at a booth together. After dinner he sent me to his condo and he left to finish off the rest of his shift. I was in no mood to explore so I went directly to his place, showered and streamed some of the shows that had been piling up in my Hulu queue. He joined me later in the night for a few glasses of red and then it was lights out.

The following day I had been looking forward to for far too long. This was the day I got to meet Elaina and Katelyn in San Diego. I scooped up Elaina from the centrally located John Wayne airport and we spent the afternoon down by Mission Beach where we soaked up some rays, played catch up and drooled over the thought of living somewhere so beautiful. We finally got to our hotel room, which was right in the Gaslamp district and by no coincidence in stumbling distance of several cool bars and restaurants. The night began with an hour of free wine tasting at the hotel, picked up when Katelyn arrived, got a little out of control when I busted out all my rap favorites on the karaoke microphone and ended with 3am pool races (of which I took no part in.) 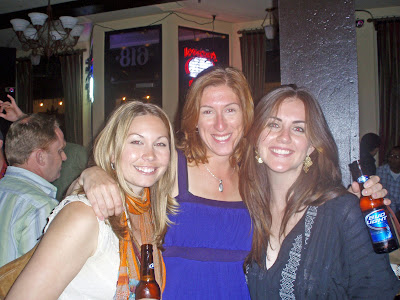 (Katelyn, Elaina and me out at some Irish bar in the Gaslamp district of San Diego)

The following morning wasn’t so pretty, as you can imagine, however we managed to get up and out for a greasy Irish breakfast, and later in the afternoon we found ourselves at the San Diego Zoo. I’ve never really been that impressed by a zoo before, but this zoo was phenomenal. We had only three hours to experience the zoo and made it a point to see the monkeys - who doesn’t love watching monkeys? Anyway we had quite the show when we were watching the Bonobo Chimpanzees. When we first arrived at the exhibit we saw a chimp eat his own vomit. A few moments later two seeing-eye-dogs (in training) were led in front of the glass that separated the chimps from the outside world. With absolutely no hesitation one of the chimps ran full force into the glass, smacking violently against it and coming within inches of the dogs. The dogs whimpered and the chimp stayed pressed against the glass as if it were still trying to find a way through. Other chimps quickly joined the first one in moving towards the glass. The dogs, impossible to calm down, were led away from the exhibit by their trainers. When I could tear my eyes away from the chimps I noticed that monkeys from nearby exhibits had all moved front and center to see the action. There was something very eerie about this entire thing, something so raw and so far from any human attempt at domestication. 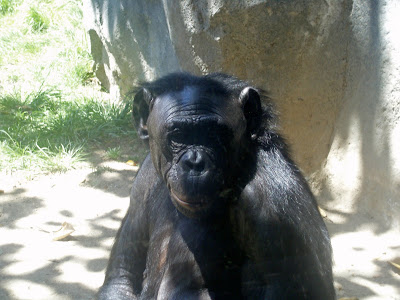 (one of the tamer chimps) 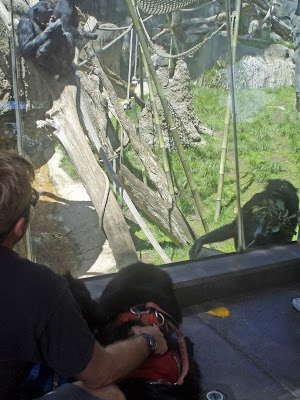 (the bonobo vs. newfoundland showdown)

Later in the evening we all made our way to Newport Beach where we stayed with friends of Katelyn and Elaina. Our first night there was relatively mellow and we got to meet the roommates and their friends. One of my favorites was this guy named Roy. Roy was an older guy, probably in his sixties, who showed up to their house in his high school football jersey. I had been warned about Roy (in a good way) and he was every bit as entertaining as I had imagined. When he arrived at the house the guys took down a birthday banner that was hanging above the door and had Roy run through it to make an official entrance. Roy’s signature line of the night had to have been “I never stand down” a phrase which he tacked onto the end of most all of his statements. I was already having a great time in Newport Beach… 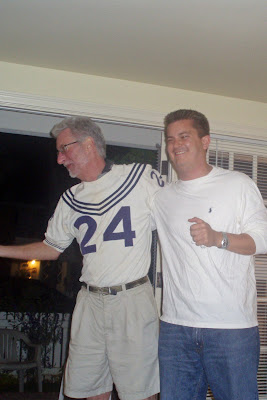 The following morning I walked a few blocks to the beach and did yoga in the sand. I stared out to the ocean to find a place to rest my eyes as I settled into my first sun salutation. My gaze rose above the waves speckled with surfers and found its place on the meeting of ocean and sky. It was simply beautiful.

In the remainder of the day we rode Cadillac bikes along the water, rented a cheesy little “duffy” boat and took it for a spin in the harbor, and spent the evening hanging around town. It was a great evening that warranted no sleep… 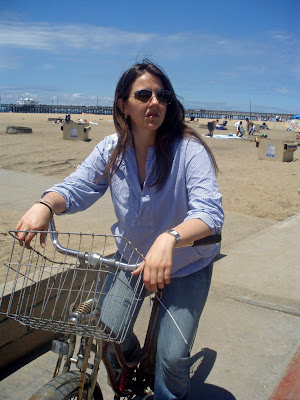 (Jim and Paul 'the captain' navigating through the harbor, jamming out to "I'm on a Boat")

So I slept on the beach the following day as I slowly made my way up to Marcus’ place in Redondo Beach.

I’m now at a place to regroup and rethink. I’m cashing in on the high-speed internet while I attempt to plan out the next two months of travel…
Posted by Al at 11:56 AM