Half Dome in Yosemite National Park is a distinct sheer rock face 4800 feet in elevation above the valley floor in which the final 400 feet to summit is lined with braided steel cables for hikers to pull themselves up on. Just days before I had the chance to attempt this 17-mile hike a man had slipped off the cables and fallen his death. With an air of gloom and several voices of caution I was hesitant to follow through my intentions to hike to summit in a day.

After spending a good portion of the day at a Starbucks in Fresno composing my previous blog and posting pictures, I drove to Yosemite and straight into the ranger village. The drive was nostalgic, as I had been to Yosemite once before. Spring break of my middler year Katy, Liz and I met up with our friend Lindsey who was a ranger in Yosemite. We stayed with Lindsey in her ranger cabin and cruised around the Park with her, getting a local feel for what seems like a little city in the infinite wilderness. Lindsey put in me in touch with her friend Andrea who is still in the Park and I had the pleasure of staying with her and her family for a few nights.

I drove to Yosemite with full intentions of hiking Half Dome, yet at some point during the drive that motivation disappeared. The cautionary voices and regard for the recent death circled in my thoughts. Andrea sensed my wavering commitment when we spoke of plans for the following day. She set me straight though, speaking more truth than she may have realized when she told me not to think about it too much. So with that I set my alarm clock for 4:00am and attempted a good night’s sleep in preparation for the hike. When the worst-case-scenario reel in my head came to a stop I finally fell asleep.

As soon as I hit the snooze option on my phone I knew it wouldn’t do me any good. I lay there, four in the morning, wide awake, heart already pumping. My headlamp came in handy as I brought things from my car and tent into the house. I spent my first waking minutes packing my bag, making sure I had everything I needed for the day-long hike. I brought a gallon of water, plus two nalgenes full of water (later I discovered that I only needed one additional water bottle, not an entire gallon and in bringing a more appropriate amount of water I could have shaved nearly five pounds off of my pack – oh well.) I packed a fleece, a winter hat, extra socks, gardening gloves, a big lunch, toilet paper, the first aid kit and emergency blanket Sarah had given me as part of a bon voyage gift, my rain jacket and of course my trusty tomato-cutting pocket knife. Once I felt my pack was complete I sat down to eat a large bowl of granola and soy milk, which seemed almost ceremonious – as if I was preparing myself for a marathon or a big presentation. 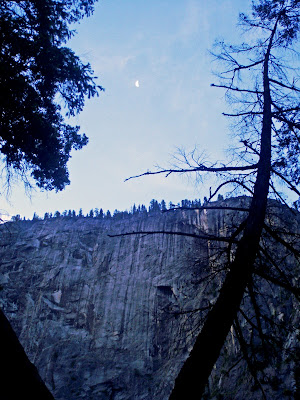 I stepped foot on the trail at 5:30am. I knew I had eight miles to go before I reached the base of Half Dome; eight miles before the cables. I was pleased to see so many other hikers up early and on the same trail. I chatted with about a dozen people on the way up, yet graciously continued past them; I didn’t want to spare any time before summit. Andrea, Lindsey and several hikers on the trail uttered the same phrase “summit before noon” and so I never stopped to rest for too long and never slowed my pace. The further along the trail I got the more confident I felt about the cables, yet I was still a tad nervous. I assured myself that if the sky looked ominous I would just admire the last 400 feet from the base – seeing as though the guy who slipped off the cables and died did so during adverse weather.

When I reached the base the sight of the mountain was intense. Many people were clustered at the base; I couldn’t figure out if they were trying to muster up the courage to scale up the mountain or if they were just admiring the view. I thought about resting, but didn’t. I pulled the gallon jug out of my bag and left it there. I took the gardening gloves out and slid my fingers in between the leather finger holes, curling my fingers into a tight fist to feel the ruggedness. I was ready. I approached the base and got in position to start the climb. I turned to whoever happened to be behind me and said “here goes nothing.” I gripped the steel cables, getting a sense for how secure my grasp felt and started moving. 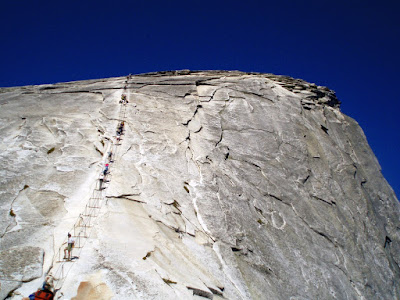 The woman behind me was named Jennifer and after her there was Troy and then Mary. Jennifer and I exchanged light hearted conversation and words of motivation as we scaled up the seemingly impossible slope. There was only one passage way along the rock face, only one passage way for two-way traffic. We hit the cables at the right time, as very few folks were coming down and very few hikers were ahead of us. Steel poles sticking out of the rock held the steel cable at the top and secured a narrow piece of wood at the bottom. The wooden slabs, every fifteen to twenty feet allowed for pause, re-composure and rest; standing on the summit-facing corner of the wood gave me enough leverage to momentarily rest my arms. Pause. Deep breath. Focus. Pull, pull, pull, pull. Pause. Deep breath. Focus. Pull, pull, pull, pull.

I reached the top of the world by 10:30am. The views were indescribable and incapable of being captured in two-dimension. I hung out on the ledge for a while taking in the exhilaration and phoned a few special people to share the moment with. When I spoke with my father he said “just don’t get too close to the edge” – I couldn’t help but laugh because I had been sitting on the ledge for our entire discussion. 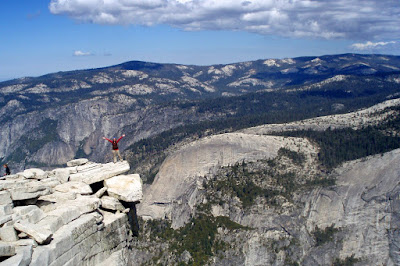 I hadn’t considered how I would get back down the cables until I heard others on the summit talking about it. I knew the sense of safety wouldn’t return to me until I got off the cables all together, and so my time at summit was brief, made even briefer by the dark clouds rolling in from a distance. Apparently Jennifer, Troy and Mary had the same idea and after I picked up the first cable to descend I noticed that all three of them were right behind me. The queue ascending the mountain was stagnant and I questioned their motivations to summit with such gloomy clouds closing in. Nonetheless I passed by them, moving backwards in a repelling fashion. Troy and I chatted on the way down. He was 75 years old and clearly in impeccable health. I shared my road trip adventure with him and he shared with me with the many adventures he has had all over this country; he immediately became an inspiration to me. The four of us gathered at the bottom of the cables and shared in whooping, congratulatory hugs. 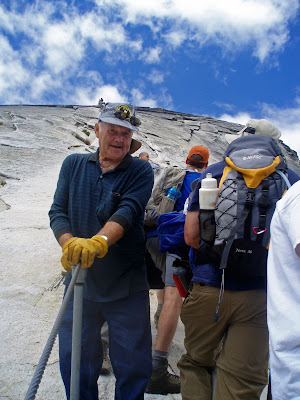 That was that. I made it back down to the valley floor, taking my sweet time and meeting another handful of other hikers on the way. By 3:30 I was back to my car and all I wanted was a hot, effortless dinner so I swung by the lodge to get cheeseburger, fries and a diet coke. The rest of the evening I spent with Andrea and her family and even managed to fit in a few phone conversations, taking advantage of the unusual cell phone reception in the ranger village. After a rewarding night’s sleep and a pleasant morning visiting with Andrea I took off for Santa Cruz to visit my friend Kristen.
Posted by Al at 8:47 PM