No room for comfort

When I left Boston I left a life so settled and comfortable. I left behind wonderful friends, memories and for the first time in eight years and eight apartments an apartment that I actually liked. I’ve been on the road for 45 consecutive days now and up until Redondo Beach I hadn’t found myself reflecting upon what I left behind. It was wonderful visiting Marcus in Redondo and although he was extraordinarily busy with work he made time every evening to hang out, catch up, and of course sing karaoke. Although most of my daytime hours in Redondo were spent planning out the remainder of my road trip and thinking forward, memories of the comforts I had left behind started making its way into my psyche. But alas, there is no room for comfort on this road trip.

I moved on and into the depths of the Sierra Nevada, camping out in Sequoia and Kings Canyon National Park for the last four nights. I camped alone for four consecutive nights and hiked alone for the three days in between. Although I could have easily befriended campsite neighbors and fellow hikers, I didn’t. In the moments of silence, in the far reaching corners of the Park I was awarded with a new sense of clarity. Reaching such paths of isolation though does not come without caution…

On my first day in Sequoia I set out to hike a trail in its highest altitude, near Mineral King. I drove nearly two hours from my campsite to reach the ranger station in Mineral King. Although I had a map of the Park and a Fodor’s tour book detailing hikes in the area, there was little information on the trails near Mineral King. The ranger was on her lunch break, so I surveyed the hiking trails that were shown on a laminated map on the ranger station’s porch and found a trail that looked good. I drove to the trailhead and parked my car among just a handful of other cars. Some cars had metal fencing wrapped around their tires, secured in place with medium sized rocks – I knew not why. I put my cooler, two food bags and toiletries bag in the bear safe and figured that was enough safeguarding for my car. 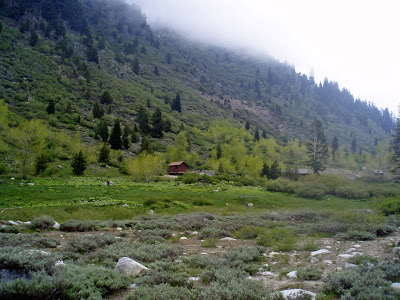 I started in a beautiful meadow that was crowned with lush mountains and above it a sky of rolling mist. A mile into the trail, slightly winded I followed the sign right to Eagle Lake. Two miles into the trail, significantly more winded I reached the last sign– left to Eagle Lake. I had 1.5 miles left to reach the lake and be compensated with a view worthy of the strenuous hike. I underestimated the 3000 feet ascend. After passing this last trail marker the terrain changed to reveal chunks of snow and wintery winds. After passing through another meadow and back into the forest I found myself in the rolling mist I had admired from nearly 2000 feet below. Immediately my visibility was limited to 15 feet in every direction. I continued hiking through the mist hoping that a break in the sky might reveal some incredible vast scenery, like how a flash of lightening illuminates all that was once dark. I got no such relief. 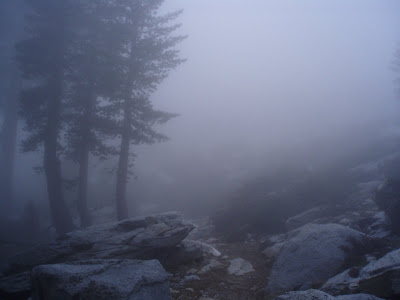 I reached a new rocky terrain and felt as though I was scaling the side of a mountain, but my visibility was still limited so I could only imagine the depths that lie below me. The certainty of the trail was fleeting. At numerous junctions I made three or four attempts to find the continuation of the trail – all were successful thus far. I heard the lake and sensed I was no more than two tenths of a mile away. The ground was almost completely covered with snow and no human footprints gave indication of where to go next. As I attempted to find the last stretch to the lake I started to forget the direction I had come from. I was dizzy, confused and out of breath. I snapped to for a moment and reckoned that I was becoming victim to the elevation. I spared no time and turned around on the trail, leaving the sight of the lake to my imagination. I continued to walk in the direction I had come from and experienced brief moments of excitement when I passed by a human-made stack of rocks or a foot mark I had intentionally made in the snow. When I crossed back across the meadow, with about two miles left in the trail I saw people for the first time since I had seen since I left the ranger station at Mineral King. When I made it back to my car I was elated – shaken up a little – but elated.

That night I returned to the same campsite I had occupied the previous evening. Luckily my tent and hammock were already set up and all I had to do was relax. I boiled water on my new propane stove and added the water to a lasagna MRE for a delicious and filling meal. I was fast asleep before the sound of children ceased and the light of day dipped behind the mountains. I rose with the sun, quickly packed up my car and headed out of the Park in search of a Starbucks. No, I had not given up, but I did need to charge my camera battery before I continued on in the Park. I went from fake eggs and bacon and instant coffee to sausage egg and cheese on a biscuit and a grande, non-fat, latte.

Back in the Park I drove straight to Moro Rock, an adored lookout point in Sequoia. The clouds were low and surround the peak and all I got out of the ½ mile climb was the exercise. Next I drove into the Giant Forest and hiked into see the General Sherman Tree. The tree was big and exciting and all but I was more interested in taking in the whole forest, not just one novelty tree, so I continued hiking in the Giant Forest. After I had my fill of giant sequoia trees I drove up in King’s Canyon to camp for the night. 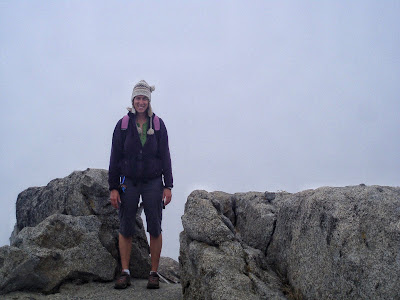 (at the top of Moro Rock) 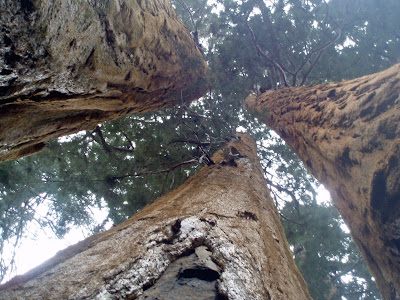 (in the Giant Forest)

I picked a site in the Azalea Campground, close to a few other families and just down the road from the General Grant’s Ranger Station, in the thumb of the Park. I did my usual campsite set up and then set off on foot to explore the rest of the campground. I walked deep into the campground, making brief eye-contact and giving salutations to fellow campers. I was approaching a loop of about fifteen campsites, few of which were occupied, and at the far end of the loop I came across a camp site occupied by five younger guys.

I immediately got a bad vibe from these guys. I continued to walk past their campsite and noticed that there were no campsites ahead of me, just a road that weaved through the woods, back around to the start of the loop. Right at the moment I had passed, four of the five guys quickly loaded into their giant 4-door truck and started the diesel engine. I thought better than to walk down the road alone, with a pack of potentially dangerous guys on my tail, so I casually glanced at my watch to somehow indicate that I needed to get going, and turned around to continue in the direction I had come from. As the guys slowly pulled out of their parking spot I avoided eye contact, hoping that they would just speed by me.

They took off down the non-campsite side of the loop and stopped at the other side of the loop where my path would have met up with them. I listened for their diesel engine to continue on, but they just sat there. I hate to say that a wave of paranoia swept over me, but it did – there was something that did not feel right about this whole situation. Any onlooker could have guessed what I was doing by reading my body language. I was partially hidden behind a tree trying to plan out my next move. There were no other roads and no people in the near distance. I glanced back at the campsite and saw the one guy there tending the fire. I discretely glanced down to the beginning of the loop and saw all four guys, carelessly standing around their truck, still with the engine on. I waited longer for the sound of the diesel engine to slowly disappear, but it didn’t. My best option was to run into the woods, so I did.

Eventually I found my way back to my campsite. My ears remained sensitive to the sound of diesel engines and my eyes sensitive to every passerby. I had another MRE for dinner and a cup of hot cocoa. It was getting cold and I was quickly growing tired of being on high alert, however I continued to sit at the picnic table, reading by the light of the slowly falling sun until out of the corner of my eye I saw the pack of guys strolling in my direction. My move towards the tent was quick and deliberate and by the time I was fully zipped into the tent I felt fairly certain that the guys hadn’t seen me. I sat in my tent reading until the sun disappeared, trying to keep my mind silent. There was no room for comfort, yet somehow I slept soundly through the night.

I woke at 5:30 in the morning to the perfectly orchestrated alarm clock of nature: sun rising, birds chirping and squirrels rummaging. Fortunate to have had a sound sleep I allowed myself few more hours of slumber before beginning my day and rolled over onto my other shoulder that felt less sore at the moment. Just as I was glad to be out of Albuquerque, I was glad to be out of Kings Canyon – or so I thought. I packed up my things when I awoke for good and headed over to the Panoramic Point trailhead near the General Grant station. At the lookout point I was greeted by a fellow Bostonian. This girl, Rachel, was a PT student at Northeastern and was out in California on a clinical rotation. We had a pleasant visit, an encounter that renewed my faith in Kings Canyon. I embarked on a fairly easy five-mile loop after I left Rachel and when I returned to my car I decided to continue on into the bottom of Kings Canyon. Here I hiked around some more and made peace with a roaring waterfall and an elegant meadow. I claimed a campground in Sheep Creek and enjoyed the silence and isolation that the night offered. 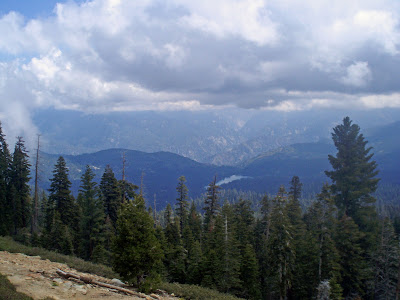 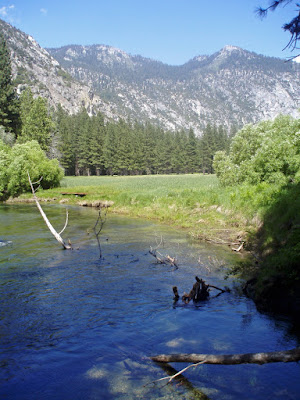