After a brief stop in Astoria, OR to seek out cinematographic scenery from the Goonies, I entered Washington and drove straight into Olympic National Park. I entered Olympic through the south, at Quinault Lake. I drove past crowded campgrounds, lodges and year-round communities as I made my way further and further into the woods. After five miles of gravel road I stumbled upon the North Fork campground, a primitive campground at best with only ten sites. I occupied a vacant site, ate, slept and left early in the morning.

I took to the road with little caffeine in my system and a mellow mix of celestial yoga songs playing softly through my car speakers. The forest was dense and the trees grew every which way in their fight for sunshine. The sun was barely breaking and its angle cast drastic shadows. Many trees were backlit and appeared almost black. I passed by a giant tree with a peculiar shape. Just past the tree I stopped the car, leaving the engine running and the music playing and walked back over to the monstrosity. I thought perhaps I was imagining it all as the tree’s formation bore a jarring resemblance to that of a thunderbird: a long branched body, a left-facing head with a protruding beak and two ears and a pair of giant wings spreading out horizontally with bent claws at their ends. The construction was made all the more extreme by the backlight and the ominous tune projecting from the car. I stole a picture; I don’t think anyone would have believed me without such proof. What the picture can’t convey though is the eerie feeling that enveloped me in the moment, a feeling like I just passed through the wardrobe and into Narnia. 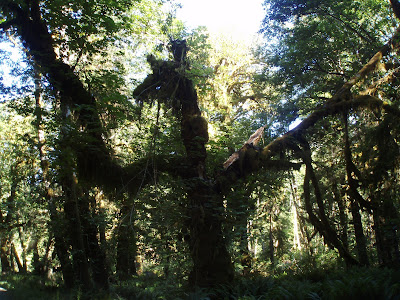 I emerged into civilization shortly thereafter and the feeling soon fled. The gravel road returned to paved road returned to highway. Highway 101 took me up and around Northwestern part of the Olympic peninsula. I made a couple of beach stops, tasting the salty air at the back of my throat and hearing the vibrations of waves crashing in between my ear drums. After a near three hour cruise around the peninsula I claimed my second campsite at Altair near the Elwha Ranger Station on the northern side of the park. Five-miles past my campsite the road ended and I picked up a mineral spring-bound trail. On the two-and-a-half mile trek in I passed by several clumps of people whose clothes bore visible spots of wetness, evidence of time spent in the springs. I thought back to the description of the mineral springs I had read in my Fodor’s travel book and recalled the term “clothing optional.” I sized up the people walking my way and took most of them for the “clothing optional” type. I wasn’t sure what to expect as I neared the sulfur smelling springs. 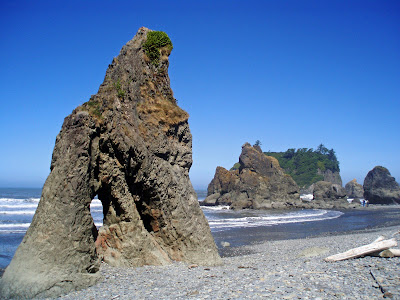 (Ruby Beach)
I bypassed the springs somewhat accidentally. I wanted to tack on just a few more miles in my trek before relaxing in the hot, smelly water. Soon the trail disappeared and I turned around to spot a male park ranger approaching from the distance. We discussed the ambiguity of the trail and he explained that he was looking for the last mineral spring pool. We chatted some and then both took off in search for the elusive springs. We soon were followed by a family and all discovered the pool together. The ranger convinced me of a few other trail options to supplement my mineral springs hike, so I decided to rest here. I dipped into the hot water and then got out. There was something terribly un-serene about sharing a small mineral bath with a family with a park ranger hovering. 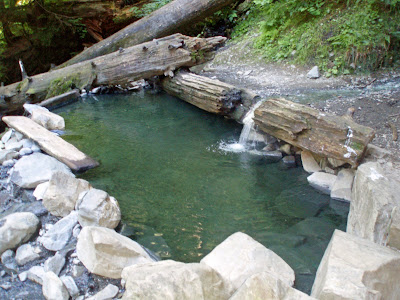 (mineral springs at Boulder Creek)
I trekked back to the parking lot with the ranger, sharing bits of random and fairly uninteresting conversation. When we departed at the trailhead he suggested that I follow him on a drive up to Hurricane Ridge, where he had to close down the ranger station. My tired legs allowed me another couple miles of hiking and then I met him at the Elwha ranger station. I followed him on a short cut leading 5,000 feet up to Hurricane Ridge. The views at the top were beautiful and uncovered an entire range of glacier peaks. In need of food and sleep I left shortly after my arrival and returned to my campsite to find that I had acquired a new neighbor. In the lot beside me was a yellow VW bus with an awning giving shelter to the side of the bus facing away from the road. After passing by a few times I realized there was only one occupant of the campsite, a shorter man in his early forties with a slightly receding hairline and legs and arms covered in bright intricate tattoos. I stopped by on my last trip from the bathroom and had a pleasant conversation with the man about both our travels. 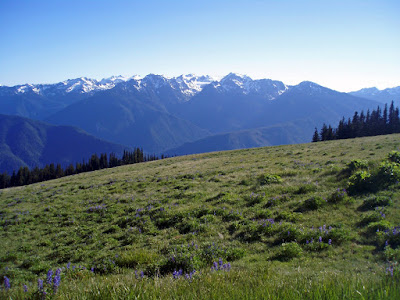 (view from Hurricane Ridge)
The next morning I rose early and left early with intentions of getting to Mt Rainier National Park by noon, which is the magic time for campsite check-outs and check-ins. I nabbed one of the few campsites left, and decided to stake claim for two nights. I snoozed in my hammock for a short while and then took off to explore. At the Longmire ranger station I picked up a trail that led to a beautiful view of Mt Rainier and intersected with the Wonderland Trail for the last few miles back to the trailhead. The Wonderland Trail is a 93-mile trek that circles around the mountain – I hope to come back and hike this someday. On my way back to the campsite I caught the view of a few waterfalls and took the customary photographs. It’s not as though I’ve grown apathetic to waterfalls, but after standing in the base of a mammoth waterfall in Kauai I have yet to experience a waterfall that truly takes my breath away.

At the Paradise trailhead the following day I laced up my hiking boots wishing they were gators (boots with spiked, cleat-like bottoms and calf-covering, waterproof shafts.) I also wish I had hiking poles, but alas was too cheap to buy a pair from the gift shop. I ascended over a thousand feet in the snow, passing by better prepared hikers than myself. The way up wasn’t so bad, other than the thickening air and the blinding snow. I wasn’t quite sure how I would get down the mountain, but assumed some slipping, sliding and falling would be in order. I stopped off at Panoramic Point to take in the near and far equally snowy mountains. Although the ranger warned me that the continuation of the trail was slick in spots I decided to press on from there and am so glad I did. I traversed down the mountain part hiker, part stumbling drunkard, part skipping child, part trickster skier, part novice snow boarder, part sledder, and part klutz. My feet were wet and frozen and my butt a little sore by the time I returned to my car, but it was totally worth it! 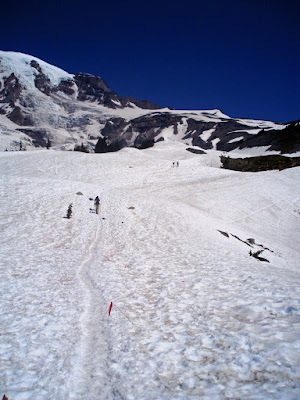 (ascending on the lower skyline trail)

Back at the campsite I was greeted by several of my neighbors. A Californian dude passed by and chatted me up about my travels; another woman came by and after noticing my license plate told me she was from Weymouth, MA; then a peppy older gentleman named Scott came by and invited me to join him, his wife, sister and park ranger friend for desert and whiskey. I was sitting in my hammock filing my nails at the time and was delighted to receive such an invitation. I followed Scott to a few campsites down the way and sat at the picnic table with everyone and ate apple pie, blueberry pie, and sipped smooth whiskey. They were several drinks ahead of me and were giddy and chatty. We shared stories and laughs and Scott educated me on geology and Dutch ovens. Scott and his sister Maurine talked about their grandmother who was one of the only women in her day to hike Mt Rainier. It was a pleasant evening and I was fortunate to be surrounded by such friendly and interesting people.
Posted by Al at 1:12 PM