Black bears don’t scare me much; they are spooked easily by humans. If I ever encounter a black bear I have my defense all planned out: arms over head waving violently, high-knee foot stomping and loud hoots, hollers and barks; all the while I would be surveying the ground to identify what I could throw. This technique doesn’t quite work with grizzly bears however. The customary grizzly bear defense involves dropping to the ground, assuming the fetal position and covering one’s neck and head. The thought of having to assume such a submissive position, let alone the righteous fear of having a giant bear hovering over me is enough to put a slight damper on my solo journeys in grizzly territory.

After an *interesting* Fourth of July in Tacoma and a refreshing visit to the Emerald City (Seattle) I left for the North Cascades National Park in northern Washington. I wasn’t quite sure what to expect at this park; I hadn’t met anyone who had been and thus had no insider knowledge. My Fodor’s book highlighted the park’s dense wilderness and abundant wildlife, but that was about it. I stopped at the ranger station on the outskirts of the park to get information on camping and hiking. A handsome and overly energetic park ranger helped me explore some options. I settled on a campsite in Johannesburg, at the trailhead for the popular Cascade Pass trail.

The sky, already overcast, grew more ominous as I got closer to the campground. My car hobbled over gravel road and around dangerous cliff edges and passed through bursts of rain and quickly moving clouds. Tidbits of worrisome information I chose not to pay serious attention to at the ranger station had suddenly started to worry me. I recalled the danger signs on the outside of the building cautioning against traveling on certain trails due to bear and cougar sightings. There were numerous signs mentioning the ‘fetal position’ defense. Other signs cautioned against hiking alone. Then I remembered the ranger saying that I would be alone at campground and that he was familiar with the area because he had just done a search and rescue there. There were a few of cars in the parking lot at the trailhead. I stepped out of my car to explore there was an eerie silence, a silence broke only by the voice of reason in my head: bears, GRIZZLY bears, cougars, alone, the cold, rain, GRIZZLY BEARS, search and rescue, fetal position, alone, GRIZZLIES…

Needless to say I turned around and found another campsite. I traveled into the main area of the park in search of other campers and was in luck. The first site I surveyed was occupied by one RV. Apparently no one else wanted to brave the rain that evening; it was coming down pretty hard. I chose a site a few down from the RV and near to the pit toilets. I spent most of the evening in my car in attempts to stay dry and warm until it was time to sleep. The following morning when I emerged from my tent I was alarmed to see that the stream which was at a comfortable distance from me when I fell asleep was now just a few yards from my tent. Yikes, that was a close call! 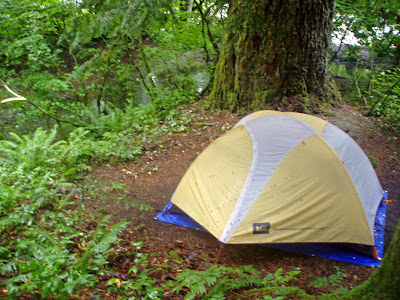 (the morning after the storm, note water level in background)

Lake Chelan would have been beautiful to visit, but it wasn’t accessible by car or by day hike. Cascade Pass would have been a gorgeous hike I’m sure, but I just spent two hours travelling away from there. It made sense to move on and so I did, driving ten hours east to Glacier National Park in Montana. The drive through eastern Washington was peculiar. Once I left the giant peaks of the park I stumbled into a precious little town called Winthrop. The town was preserved from the 1920’s; large vintage store fronts set boundaries on both sides of the street. I felt like I was on the set of Blazing Saddles when the townsfolk banded together and created a fake city. It was more than real though and most of the shops were open for business. I got a latte and strolled around taking in the scenery. Everyone I passed on the sidewalk was doing the same curious head swirl, as if to portray the wonderment of “where the hell am I?” Just past Winthrop was a desert, yes a desert in northern Washington. Next there were rolling farm fields. The fields brought me into Idaho, which was altogether an unmemorable state. Then I was in Montana, progressively approaching a curtain of spectacular mountains. 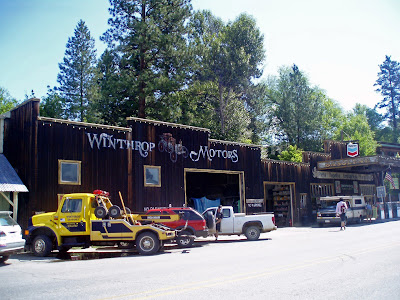 I didn’t have quite a concept of how spectacular these mountains really were until the following day when I drove the famous “Going to the Sun” road that runs west to east in the park. With that drive in mind I chose a campsite in Apgar Village, just past the western entrance to the park. Following the advice of my Fodor’s book I started the drive early, to avoid the crowds and delays. I purposefully chose the soundtrack for this drive, Easy Star’s album “Lonely Hearts Dub Band” (an album Jayme had burned for me before I left Seattle) which is a reggae cover of the Beatles. It was fitting. The first dozen miles were along windy roads lined with towering evergreens that broke for just the briefest moments to reveal the colossal peaks ahead. Soon the mountains got so close that the evergreens could not shield them anymore and the incredible peaks were right in front of me. The road hugged along mountains and passed underneath multiple waterfalls, creating quite the driving obstacle, especially when trying to take in the views. I took advantage of the numerous turn-outs though and took picture after picture. 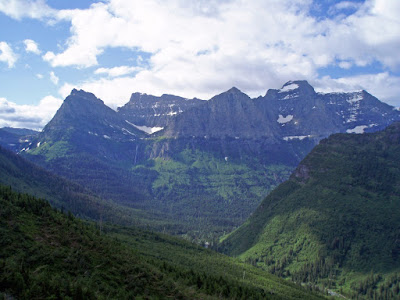 I stopped at the Logan Pass Visitor Center just past the Continental Divide to get a feel for the mountains on foot. I hiked the popular trail to Hidden Lake Overlook, negotiating yet more snowy terrain. I made it a point to stay relatively close to other hikers as I didn’t want to make myself an easy grizzly target. Three mountain goats and a kid were casually hanging out at the overlook. They were so majestic and to my merriment, photogenic. My visit to Glacier was immediately worth it. 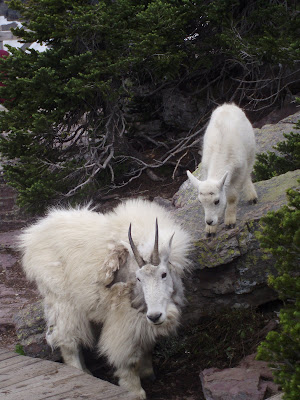 I managed to get in a few more brief hikes even with the intermittent thundershowers and staggered flow of hikers. That night I camped south in the park at Two Medicines. The rain and wind persisted through the evening, again confining me to my car until bedtime. Although the beauty here is unparalleled I will be happy to return to dry lands where I can hike at my own pace and on any trail I chose without fear of grizzly bears. 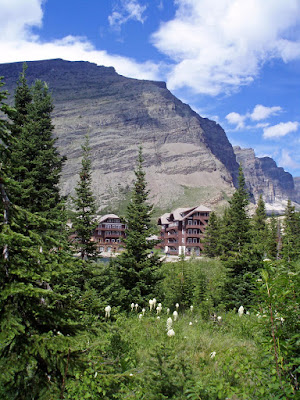 (view of lodge from Swiftcurrent Lake trail in Many Glaciers)
Posted by Al at 1:34 PM